A look ahead to our trip to Edgar Street. 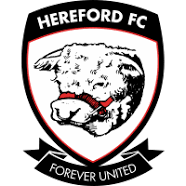 Farsley Celtic will be looking for an immediate response on Tuesday evening, making the long trip to Hereford in the National League North.

Farsley’s run of four games without defeat came to an end on Saturday with a 1-0 loss to Alfreton Town, and with the season now at its halfway point, a win at Edgar Street would provide a much-needed boost.

The trip to Hereford is Russ Wilcox’s side’s final road trip until January 28, with four games at the Citadel in between, starting with Saturday’s FA Trophy clash against Marske United, before three league fixtures.

The Bulls, who have experienced a disappointing season thus far as they sit 15th, ended a run of seven games without a victory on Saturday, recording an impressive 2-0 win over promotion-chasing Scarborough Athletic.

Looking ahead to the trip down South, Russ Wilcox said: “It’s not easy making the journey, our lads are working and I think they’re hybrid as well, so that means they’ll get plenty of rest.

“They’ve won 2-0 against Scarborough who are flying at the moment, so it’ll be a difficult game.

“But again, I think this league is unpredictable, anybody can beat anybody on any given day, the disappointing thing is, Saturday should have been a win.”

Lewis Turner played his first minutes since early December on Saturday, appearing off the bench in our defeat to Alfreton Town.

Chris Atkinson returned to training last week, but Saturday’s fixture came too soon for the midfielder.

Tickets can be purchased online at a discounted rate before 4pm by clicking here.

All the important supporter information can be viewed here.